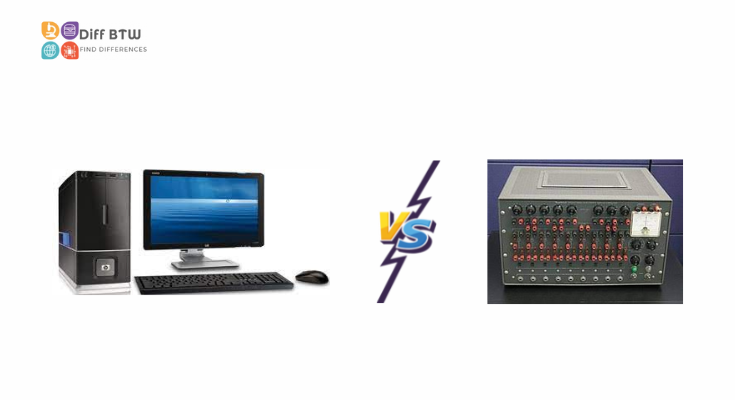 When most people think of a computer, they think of a digital device. However, there is an older type of computer that relies on analog methods to calculate and solve problems. This article will compare and contrast these two types of computers.

Analog computers use continuous physical quantities to represent numerical values. This means they can take into account the physical properties of a problem, such as voltage, current, and resistance. Digital computers, on the other hand, use binary digits (zeros and ones) to represent all data. This representation is much more limited in scope, as it cannot account for the natural variability found in many problems.

What is Analog Computer?

Analog computers are those that use a continuously variable signal. In other words, the data is represented by a physical quantity that can vary, such as voltage or mechanical position. This makes them well-suited for specific tasks like measuring temperature or speed.

However, they’re not as good at mathematical operations, which is why digital computers are more common today. It’s also difficult to store and manipulate analog signals in memory. It’s also tough to digitize analog signals, meaning you have to physically copy an object from one form to another if you want it in digital form.

Analog computers are based on a continuous representation of values. They use electrical or mechanical phenomena such as light, sound, pressure, or electricity to model data and perform calculations. Because analog computers can represent and process data continuously, they are well suited for measuring, comparing, and integrating voltages or speeds. Due to their ability to take measurements at any point, many people consider them more accurate than digital devices. The main drawback is that analog computers require large amounts of power and tend to be slower than digital devices.

What is Digital Computer?

A digital computer is a computer that uses discrete values, usually represented by voltages, to perform calculations and store data. In contrast, an analog computer uses continuous values to represent data and performs calculations using analog circuits. The trade-off between these two computing systems comes down to speed and accuracy. Analog computers are much slower than digital computers but have much higher accuracy rates because they work with mathematically more precise numbers.
A new type of computing system has emerged in recent years that combines the best features of both analog and digital computers.

How does Digital Computer Works?

A digital computer uses a series of 0s and 1s to store information. This is because digital devices can only understand two states, on or off, represented by these numbers. When you add more digits to a binary number, you can increase the amount of information stored in that number. For example, eight binary digits can store one byte of information. Sixteen digits could represent two bytes, and so on. Unlike analog computers, digital computers have no limit to how much data they can hold.

Analog computers use a continuous representation of variables in electrical signals to perform calculations. On the other hand, a digital computer uses discrete values (ones and zeros) to represent data and perform calculations. For example, an analog computer will continuously measure the value of 10 volts as it changes from 10 volts to 12 volts over time. The digital computer will measure only two possible voltage levels – 0 or 1. It can do this because it uses binary arithmetic; the word binary means having two parts. In binary arithmetic, you need only one digit to represent any number greater than zero. There is no carrying involved with adding two numbers because no subtraction operation is available in binary arithmetic.

Analog computers are limited in the types of output they can produce. They can usually only generate one type of signal, such as electrical, mechanical, or pneumatic. Digital computers, on the other hand, can generate multiple types of output, including text, graphics, audio, and video.