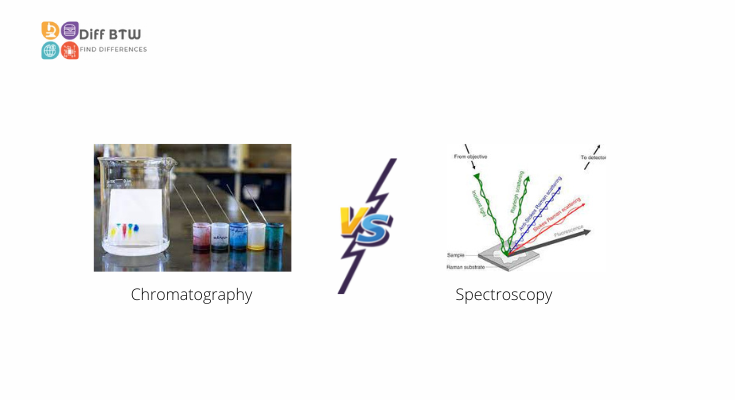 Chromatography and spectroscopy are powerful analytical techniques used to identify the identity and quantity of different chemicals in solution. While they have similarities, their methods are fundamentally different. In this article, we’ll compare chromatography and spectroscopy on three levels—practicality, ease of use, and cost—to show you the difference between these two similar yet distinct analytical methods. We’ll also give you an example of how each technique can be used to answer different scientific questions!

Chromatography is the separation of components based on their physical and chemical properties. To separate the different components, they must be dissolved in some solvent. Once the solution is prepared, it is then injected into a column containing a stationary phase (a material that separates the solutes).

Spectroscopy is the study of electromagnetic radiation. Different substances emit or absorb specific frequencies of light. By measuring the frequency of these emissions or absorptions, scientists can determine what chemicals are in the sample.

There are many types of spectroscopy, including infrared, ultraviolet-visible, X-ray, nuclear magnetic resonance, Raman, and fluorescence. Each technique has its strengths and weaknesses.

Difference Between Chromatography and Spectroscopy

In a nutshell, chromatography separates a mixture distribution of the components between two phases. At the same time, spectroscopy is the identification and quantification of molecules by absorption or emission of electromagnetic radiation.
One key difference is that chromatography separates compounds based on their affinity for two different phases, whereas spectroscopy separates compounds based on their ability to absorb or emit light.
Another key difference is that in spectroscopy, no distinct physical boundaries separate the various substances, but in chromatography, distinct boundaries separate the different substances. It is also worth noting that when measuring concentration with chromatography, the volume measured is often challenging to discern (since this measurement is usually done via UV light).

Applications of Each Analysis Method

Both chromatography and spectroscopy are important analytical methods used in chemistry. They both have their unique applications and advantages. Chromatography is often used to separate and analyze compounds, while spectroscopy identifies and determines their structure. Some specific examples of chromatography applications include gas or liquid chromatography, which separates compounds based on weight and size differences. Gas chromatography helps decide what elements are present in a sample because it can identify whether there are lighter or heavier molecules present; this technique also helps determine if there are different types of atoms present like oxygen, nitrogen, hydrogen, carbon, or sulfur.

Limitations of Both Methods

Comparison Chart Between Chromatography and Spectroscopy