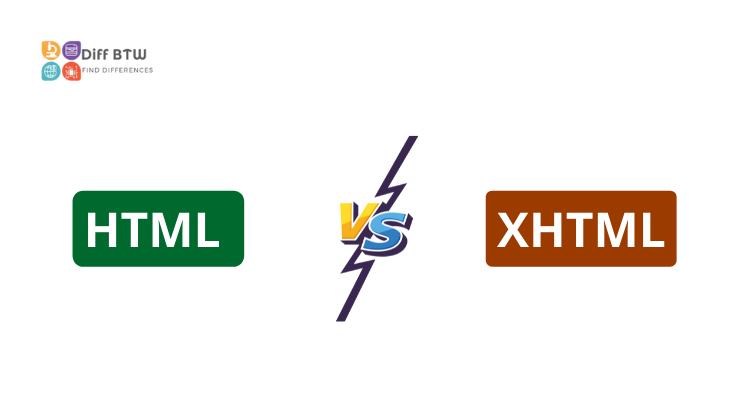 HMTL and XHTML are similar but different technologies structure, and add formatting to web pages. So, what’s the difference between HTML and XHTML? Let’s look at some key elements that set these two technologies apart and their applications in today’s developing world.

HTML is easy to learn and use. It is not as strict as XHTML so it can be less frustrating for beginners. However, because HTML is not as well-defined, creating pages that look the same in all browsers can be more difficult.

XHTML is more difficult to learn than HTML, but it can be less frustrating for experienced developers. XHTML pages are likelier to look the same in all browsers because they must conform to stricter standards.

The Hypertext Markup Language (HTML) is the standard markup language for web pages. HTML tags allow you to add formatting and structure to text-based content. You may use HTML to create headers, paragraphs, lists, links, images, videos, audio, and other elements. HTML is the foundation of all websites.

XHTML is a subset of HTML that defines additional tags and attributes for describing the structure of documents. These tags allow web developers to create more complex web pages than those made using only HTML.

Differences Between HTML and XHTML

HTML is an application of Standard Generalized Markup Language (SGML), while XHTML is a reformulation of HTML 4.01 using XML 1.0. HTML and XHTML documents must conform to strict syntactic rules to be well-formed. Unlike HTML, XHTML requires all elements to be properly nested and all tags to be lowercase. Additionally, empty elements must be closed in XHTML (e.g.

When coding for web browsers, it is essential to understand the difference between HTML and XHTML. They may look similar, but they are pretty different. The main differences are that HTML does not require a declaration of encoding and has no strict formatting rules, while XHTML requires a declaration of encoding and strict formatting rules. The regulations behind each type can be found in the next blog post, Coding for Web Browsers: Understanding HMTL.

The main difference between HTML and XHTML is that XHTML requires all elements to be correctly nested within each other. Another difference is that all tags in XHTML must be lowercase. Lastly, empty elements must be closed in XHTML using a trailing slash.

4. Choosing Between HTML and XHTML

When it comes to HTML and XHTML, there are a few key differences that you should be aware of. HTML is the standard markup language for most web pages, while XHTML is a stricter, more well-defined version of HTML. Additionally, HTML5 is the latest version of HTML, while XHTML 1.0 is the latest version of XHTML. So, if you’re looking for maximum compatibility and flexibility, you should go with HTML.

Key Differences Between HTML vs XHTML

In conclusion, there are a few critical differences between HTML and XHTML. For one, XHTML is more strict than HTML and must be well-formed. All tags must be nested appropriately, and all attributes must be quoted. Additionally, XHTML requires all tags to be lowercase and all attributes to use only values – never variables. Finally, empty elements in XHTML must permanently be closed with a trailing slash.